How to Install Android 5.0 Lollipop on Nexus 7

Home » Features » How to Install Android 5.0 Lollipop on Nexus 7

BreakingModern — Google launched its new line of Nexus devices with each running its latest mobile OS, Android 5.0 Lollipop, last month. Then the Android 5.0 update reportedly started to roll out to other devices. Recently I found out my first-generation (2012) Nexus 7 tablet was ready to get the Over-the-Air (OTA) update.

It turns out that Google released the Lollipop update this week for the Nexus 5, Nexus 7, Nexus 10, as well as the Nexus 4 devices. If you haven’t seen the update, just give it some time as Google says OTA updates are rolled out in phases. Keep hitting System Updates and it will arrive eventually, hopefully sooner than later!

I first found out that 5.0 was available when swiping down on the Notifications list as shown below. Tap on the notification and it will take you directly to the System Update installation screen. If you don’t have the System Update message in your notifications for some reason, you can manually check for the updates. To do that, go to Settings > System About Tablet > System Updates. There you will be able to find the update and start it manually.

From beginning to end, the update can take an hour or longer. 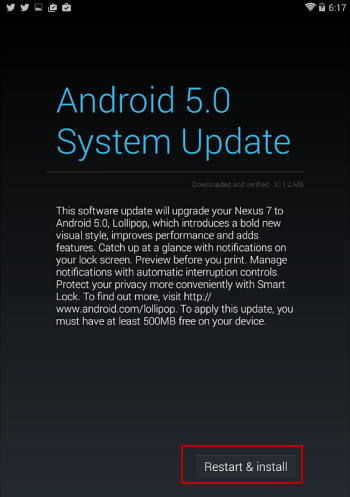 Below are a couple screenshots of the new design and what you can expect in Android 5.0 Lollipop. You can easily page through apps that are running separately, and the touch interface is responsive and works in a more intuitive way — but not always.

When I installed the upgrade to Lollipop on my Nexus 7, which ran KitKat 4.4.4, things seemed to slow down considerably. Apps take several seconds to launch and switching the entire interface would freeze up the device. Of course, this is the result I had with my 2012 Nexus 7. I would be interested to see if the performance of the 2013 nexus 7 is better.

To continue testing, I went ahead and did a complete factory reset of my tablet, and installed Android 5.0 clean on the device. Now it does run smoother, but if you don’t want to have a slow tablet or deal with a factory reset, I don’t recommend upgrading to the new version of Android.

Based in rural Minnesota, Brian Burgess covers tech for BreakingModern. Follow him on Google at +BrianBurgess and on Twitter at @mysticgeek.