Superheroes Beyond Comics and Movies

BreakingModern – Superheroes have been a staple of comic books since the day Superman leapt over his first building in 1938. These days, superheroes like Wolverine and Ant-Man (!) are stars of the multiplex too. There’s one media that’s doggedly resisted the adventures of costumed vigilantes: prose fiction. But that’s rapidly changing. 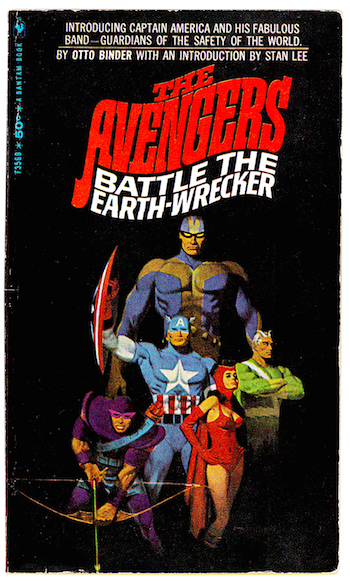 Certainly there have been superhero novels from the very beginning (The Adventures of Superman was published in 1942), but readers never showed much enthusiasm for them. The Avengers crushed movie box-office records in 2012. Their prose fiction debut (The Avengers Battle the Earth-Wrecker), however, went unnoticed back in 1967.

Along the way, prolific author Nora Roberts wrote an interesting superhero-romance hybrid novel called Night Shadow in 1991. And Jonathan Lethem famously included a superhero character in his acclaimed 2003 novel, The Fortress of Solitude. Looking back, both efforts were brave genre-busting attempts to bring superheroes to the mainstream.

And now, finally, superhero fiction may be catching fire. A few years ago Marvel Comics launched a prose fiction initiative that produced two highly enjoyable novels. Both Rogue Touch by Christine Woodward and The She-Hulk Diaries by Marta Acosta openly courted a female YA audience.

Marvel Press is working hard to escalate its efforts to bring superheroes to bookstores. Best-selling authors with loyal readers are now being approached to pen upcoming novels. NYT best-selling author Margaret Stohl (Beautiful Creatures) recently wrote a Black Widow novel (Black Widow: Forever Red) and she’s agreed to write a sequel. Newbery Award-winner Shannon Hale (Princess Academy and Ever After High) will collaborate with her husband Dean to produce Captain Marvel and Squirrel Girl novels. Even more exciting is the news that Eoin Colfer, the author of the popular Artemis Fowl books, is busy writing an Iron Man novel. And don’t forget about DC Entertainments’ new Super Hero Girls venture. The company is set to publish a string of middle-grade novels based on its library of iconic female characters. The first novel (Wonder Woman at Super Hero High by Lisa Yee) will be released early next year. Expect to see follow-up novels featuring Batgirl, Supergirl, and Harley Quinn.

All this activity supplements a boatload of superhero novels written by indie authors with no allegiance whatsoever to Marvel or DC. Some of the best of these self-published efforts include Gailsone: Big in Japan by Casey Glanders and The Villain’s Sidekick by Stephen T. Brophy. Superheroes have always been visual. And that’s why they work well in comic books and movies. But superhero prose fiction affords authors an opportunity to explore their characters in more depth and free from the demands of periodical storytelling. And for critics who resist reading superhero novels, we can only ask: what’s more visual than your imagination? Why let an illustrator or an actor define your expectations? There’s no reason a Superman adventure can’t be as explosive and colorful in prose format than it is in any other format. Superheroes have conquered comic book shops and movie theaters. It’s time they conquered bookstores too.